LUCKNOW, JANUARY 29: It was a fantastic and a well-deserved maiden title triumph for Petroleum Sports Promotion Board’s A. Amalraj over top-seed and reigning singles champion Achanta Sharath Kamal in the final of the 73rd Senior National and Inter-State Table Tennis Championships. But it also turned out to be a hugely controversial one for the new champion who, throwing all playing norms and discipline out of the window,  chose to celebrate his victory by firs


LUCKNOW, January 29: Ultimately, the two best men and two women in terms of quality and rankings here will fight it out for the coveted singles titles at the 73rd Senior National and Inter-State Table Tennis Championships later this evening at the SAI sub-centre hall on Sunday.  So, it will be the PSPB men and women finals all the way.

No.1 Achanta Sharath Kamal, who beat Soumyajit Ghosh 4-1, will take on No. 2 A. Amal Raj, who mowed down Subhajit Saha, 4-

Ghosh, Ankita give no quarters to PSPB players


LUCKNOW, January 28:  It was a well-written script and the picture was perfect until the pre-quarters. The much-awaited twist in the tale in men’s singles of the 73rd Senior National and Inter-State Table Tennis Championships at the SAI sub-centre hall came about only after the interval as the quarterfinals began with all top-eight seeds taking centre-stage.

The twist in the picture was given by North Bengal’s Soumyajit Ghosh, who

Another jewel in UPTTA's crown 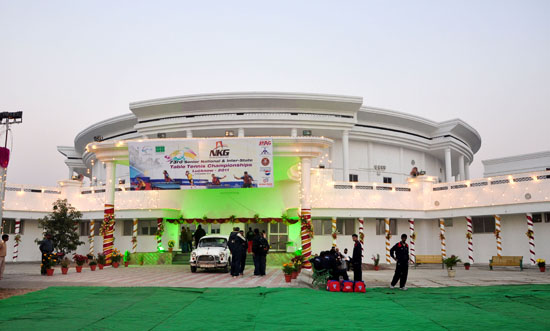 When you think of Lucknow, two things come to mind instantlyone tehzeeb and two, mehmaan nawazi. This uniqueness of the people is quoted in verses and chapters and the city’s historical value and its culture is as popular as the intricate chiken work the hand-weavers’ do on a sari or a salwar that women wear so fondly or the kebab stalls that people from far off places flock to. All these may or m

Top-10 men sweat it out as women hang out


LUCKNOW, January 27: Even as men paddlers, including all top-seeds, sweated it out inside the arena playing first-round matches, the top-10 women players spent quality time outside it, gazing sun and looking at the draw sheets to prepare themselves for the second round matches in the 73rd Senior National and Inter-State Table Tennis Championships here on the opening day of the singles events at the at the SAI sub-centre hall.